HomeBlog“With an apple I will astonish Paris.” AHA alum Helena Roy looks at the legacy of Paul Cézanne in the year of his 175th birthday…

from the Blog “With an apple I will astonish Paris.” AHA alum Helena Roy looks at the legacy of Paul Cézanne in the year of his 175th birthday…

On 19 January, it would have been Paul Cézanne’s 175th birthday. The Post-Impressionist painter bridged the gap between 19th century Impressionism and 20th century Cubism, and his inimitably idiosyncratic style is still a source of inspiration today. The portraits, landscapes and still-lifes that dominate his repertoire are iconic – prized by famous museums the world over. In celebration of a matchless artist, here is a concentrated retrospective of his life and work…

Cézanne’s life forever had a backdrop of culture and wealth: he absorbed the influences of Courbet and Manet in his early years; was friends with Emile Zola from childhood (breaking promptly when Zola based an unflattering character on him in the 1880s); and had a strong bond (eventually a collaborative relationship) with Camille Pissarro. His father was a successful banker, affording him a financial security most artists of his time did not receive. (His father’s imposing portrait was one of his earliest works, painted in 1865.)

The Painter's Father, Louis-Auguste Cézanne, 1865 – a work which now hangs in the National Gallery

His early years in Paris (1861-1870) were characterised by murky colours and domineering black – garnering the epithet the ‘dark period’. Cézanne’s work was violently expressive – depicting murder and rape – and he experimented with the use of a palette knife to paint (he later disparaged this technique, telling Renoir it took him twenty years to realise painting was not sculpture). Cézanne started with an edge of Caravaggio’s gloomy shading, as seen in Portrait of Uncle Dominique, (1865–1867).

The Murder, (1867-1868), painted during Cézanne’s ‘dark period’ – which refers to both his style, subject matter and, it is said, his personality at the time

Portrait of Uncle Dominique, 1865–1867, a work of Cézanne’s ‘dark period’, which is now displayed at the Metropolitan Museum of Art

An Impressionist stage followed (1870-1878), during which he flitted between Provence and Paris. Under Pissarro’s influence he abandoned darker hues, shifting to light and airy landscapes. A mature period in Provence (1878-1890), comfortably continued this, encompassing his renowned paintings of Montagne Sainte-Victoire, a mountain in southern France overlooking Aix-en-Provence. 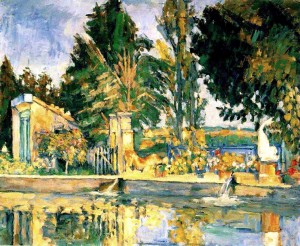 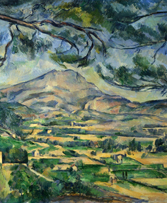 Mont Sainte-Victoire (c.1887), displayed at the Courtauld Institute of Art. Cézanne painted many pictures of this subject during his mature years 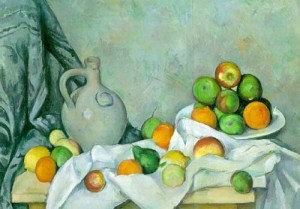 Cézanne created some of his most iconic works in his twilight years (1890-1905), including The Card Players (1892) and Les Grandes Baigneuses (1898-1905). Deceptively simple paintings conceal a myriad of subtle shading – but his shapes and colours aren’t realistically detailed. Cézanne used heavy hues, creases and shades to emphasise the contours he found so appealing – giving his ‘impression’ of an object, not the veritable image. He once said ‘painting from nature is not copying the object; it is realising one’s sensations.’ He simplified natural forms to their geometric fundamentals, giving an architectural structure to the nature he portrayed. What you see is not the exact picture, but Cézanne’s feelings – he painted a weighty, thick surface over reality, giving us his ethereal sensation instead. 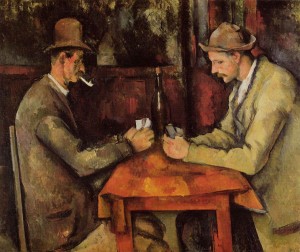 The Card Players, Fifth Version, (1894-1895) – a work in Cézanne’s iconic series, seen by many as a prelude to the genius work of his final years 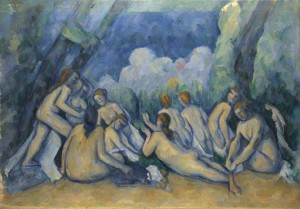 Les Grandes Baigneuses (1898-1905), a painting from Cézanne’s renowned series, which hangs in the National Gallery.

As his life became onset with troubles, recognition of mortality crept into his work. A devout Roman Catholic, his faith drew forward in his work as his age slowly got the better of him. He had commented previously : ‘When I judge art, I take my painting and put it next to a God-made object like a tree or flower. If it clashes, it is not art.’ 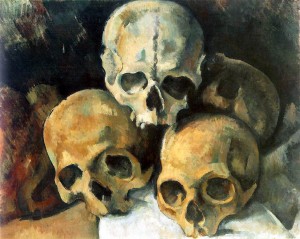 Pyramid of Skulls, (1901) – painted during Cézanne’s ‘final period’ in Provence, when he began to focus more on death and mortality. He painted several still lifes of skulls during his final years. 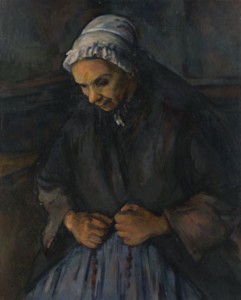 An Old Woman with a Rosary, (1895-1896) - evidence of Cézanne’s growing dependence on Catholicism during his final years. The painting is displayed at the National Gallery.

Cézanne once said ‘We live in a rainbow of chaos’. He incomparably captured that confusion and beauty, so present in nature, and inspired the colourful works of Henri Matisse and Pablo Picasso, to name but a couple. In a way, his artistic trajectory is cyclical, mirroring life as he experienced it – confused angst and darkness moving into light, and returning to shades of mortality in his final years. His innovation in art is now timeless. Cézanne paved the way for ground-breaking art – allowing future artists to be fearless in bucking trends. His unique visual contribution to history of art just outmatches the attitudes he shaped towards it, which allowed so many after him to try to be different.

With thanks to Wikipedia, the Courtauld Institute and the National Gallery for photos.