from the Blog The Joy of Discovering Lost Art, by AHA alum Charlie Whelton 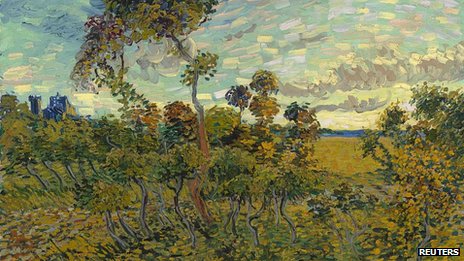 These were the words of the Van Gogh museum’s Axel Rueger when he confirmed the authenticity of Sunset at Montmajour, the first full-size Van Gogh to be discovered in 85 years. Mr Rueger was not alone in his elation. I certainly felt a surge of joy on hearing the news, and I am sure I was not the only one to feel excited from afar. It is an odd type of happiness that accompanies the discovery of a lost or unknown artwork, however, and one that varies depending on the details of the case.

Sunset at Montmajour, for example, was not really ‘lost’ in the literal sense, but rather misattributed. The piece was long believed to be a fake, and so remained in the attic of a Norwegian collector for decades before it could finally be declared genuine. In a situation like this, the long road to verification leaves one feeling happy for the artist himself – authentication being a posthumous vindication of a work long misunderstood. In a similar vein, Pablo Picasso’s Seated Woman With Red Hat was ‘lost’ for years in the basement of a museum – mislabelled, unappreciated and kept from public eyes until it was tracked down by the head of an auction house. This type of discovery of lost art is satisfying, because it appeals to our sense of justice. Not only has the world been blessed with a ‘new’ Van Gogh piece, but a beautiful artwork is also finally getting the credit and exposure it deserves.

This being said, it is certainly more romantic when a lost artwork is discovered hanging on the wall of a modest family home, rather than the basement of a museum. The story of the recovery of Martin Johnson Heade’s Magnolias on Gold Velvet Cloth is a wonderful example of this. A man from Indiana bought the 19th century work for ‘next to nothing’ to cover a hole in his wall, where it stayed until he noticed the similarity between it and a painting in the art board game Masterpiece. After verification, he sold the work for $1.25 million.

This type of story resonates in a different manner to the Van Gogh authentication. We like it when a potential Michelangelo is found down the back of a sofa in Buffalo because it feeds into a common fantasy we have of being plucked from obscurity and catapulted to stardom. It says not to take things at face value, that the strange $5 painting bought from a thrift shop could be a Jackson Pollock, and that the ugly plaster statue of Buddha could be solid gold underneath. If the joy of the Van Gogh discovery is in the justice of verification, with these stories it is in the romance of speculation. The beauty of possibility.

The Golden Buddha reminds us that discovery of lost art takes many forms. The chance discovery of the 17,000-year-old Lascaux cave paintings by four boys and a dog in 1940 seems a world away from the sophisticated verification of Sunset at Montmajour, for example. Likewise, the Venus de Milo, one of the most famous sculptures in the world, was found by accident by a peasant digging in his field on a Greek island in 1820. More recent is the excavation of the sunken city of Heracleion. Lost for 1,200 years, it was considered legend for centuries, before being rediscovered in 2000. The images demonstrate how magical the rediscovery of long-lost treasure can be.

A diver at the excavating at the lost city of Heracleion

While this article has mainly dealt with the thrill of discovery or the justice of proper attribution, this overlooks the (admittedly geeky) joy of the detective work inherent in finding and verifying an important work. The popularity of The Da Vinci Code has certainly added to interest in locating Leonardo da Vinci’s Battle of Anghiari, believed to be hidden behind a Giorgio Vasari fresco in Florence’s Palazzo Vecchio. While this search, with cryptic clues, endoscopic cameras and hidden cavities continues, the recent discoveries of works entitled La Bella Principessa and Salvator Mundi appear to offer a greater chance of authenticating a genuine lost Da Vinci artwork. While the debate over these works is less ‘Dan Brown’ than the search for the Battle of Anghiari, an array of books, articles and lectures arguing both sides have been produced in the pursuit of verification. The desire to figure out the final piece of the puzzle is strong in human nature, and the potential discovery of lost works by great artists offers the perfect opportunity.

Whether the particular joy of the recovery of a lost piece of art comes from the justice of attribution, the improbability of the discovery or the puzzle of verification, there is always one common factor: that a work of beauty once lost, is now found. Having written for this blog before on artworks being stolen and defaced, it restores hope to witness what is essentially the opposite happening in Amsterdam right now.