Last week, the day before Thanksgiving, I visited the “Robert Indiana: Beyond LOVE” exhibition at the Whitney Museum of American Art in New York City. Thousands of tourists had descended on the city for the holiday, their photos showing off the usual sites—the Empire State, the Rockefeller, perhaps some shots of Central Park. One attraction that has become increasingly popular in recent years is Robert Indiana’s giant “LOVE” installation on Sixth Avenue. 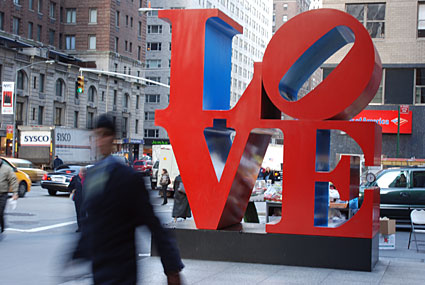 “LOVE” (1966) speaks to the tourist, to the cosmopolitan visitor who poses by the sculpture, and quite possibly uploads it as their cover photo a few hours later. It is a Pop Art image of the 1960s, the extraordinary success of which has ironically contributed to its artist’s relative anonymity. Indiana, whose affiliation with America is so strong that he changed his professional name from “Clark” to “Indiana” (his native state,) has not exhibited in New York in years. His artistic merit clouded by the commerciality of “LOVE,” Indiana has been consigned to the backbench of Pop Artist fame. The Whitney, recognising the talent of an artist confined by commercial success, allows Indiana valuable space to broadcast his striking vision with “Beyond LOVE.”

The exhibition is arresting the second you exit the elevator: picture giant installations of colour and vibrancy, with piquant words—eat, hug, die—reappearing in different combinations at each corner. It is alarmingly American, with its installations evoking highway signs, adverts, gambling tables, pinballs and slot machines—the things that formed the cultural fabric of the American Midwest in the mid-twentieth century.

The materials Indiana uses are fascinating, not least because of their variability. Indiana takes inspiration not only from the physical American landscape—industrial wreckage is notably featured in his repertoire—but also the literary greats who have shaped the distinctive American canon. One room features pieces with sentences from the works of great American authors (think Whitman, Melville and Longfellow) stencilled upon them. Often juxtaposed with Indiana’s signature hard-edged, polychromatic style, these transcendental quotes speak to the wonder of the American Dream. “Year of Meteors” (1961) has Whitman’s words “Nor forget I to sing of the wonder” arranged around its centre, allowing Whitman to call to the wonders of America and simultaneously make clear his awareness of its pitfalls.

Year of Meteors, featuring Whitman's "Nor forget I to sing of the wonder" quote

These pitfalls come in hard and gritty form, quite literally. In the late 1960’s, when Indiana fell on hard times and could not afford paint or canvas, he began salvaging industrial materials from the American landscape. Metal objects, derelict pieces of wood and discarded instruments became the focus of his “assemblages,” of which “Wall of China” (1960) is an example. Its broken pipes and wood aggressively invade the viewer’s space, allying the grime of industrial wastage with the real world. Recycled materials become art once again, except this time it is objects, not words, which facilitate the transformation.

Examples of Indiana's use of recycled materials

“Robert Indiana: Beyond LOVE” does exactly what it says on the tin: provides access to an artist whose repertoire extends beyond his quintessential image, and whose creations offer a poignant insight into the failure of the American Dream. As I watched the Macy’s Thanksgiving Day Parade on TV the next day, itself an essential part of the holiday, I couldn’t help but be reminded of Robert Indiana’s vibrant, kinetic pieces. The floats were bright and gaudy. Their pudgy round forms encouraged smiles, laughter, even wonder as they made their slow, bobbing way through New York’s streamlined verticality. They were also temporary, and I was aware that like the fragile American Dream Robert Indiana so frequently evokes, they could easily pop.