It’s safe to say that I am an avid fan of the work of the Northern Renaissance, having written a dissertation on Holbein’s The Ambassadors last year. It excited me greatly to hear then, that the National Gallery was to dedicate its Sainsbury Wing to masterpieces of the German Renaissance under the entrancing title Strange Beauty, offering an alternative cultural exploration that has been marginally overshadowed by the Veronese  show opening this time next month. 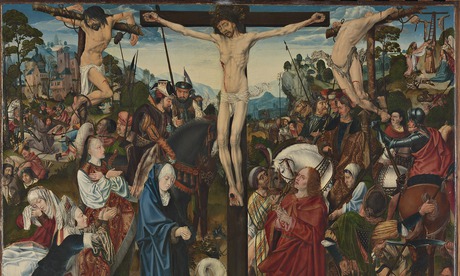 'The Crucifixion' by the Master of the Aachen Altarpiece, photo courtesy of the National Gallery

The premise of the exhibition was captivating –  to shed light on the overlooked paintings produced by German painters, often shrugged off in favour of Italian High Renaissance greats, perhaps because of their more eccentric sense of “beauty”. The information in the first rooms gave a fascinating insight into the history behind the National Gallery’s acquisition of German Renaissance works, or perhaps, their lack thereof. It was startling how overlooked this area has been. Indeed,  it took 23 years for the National Gallery to acquire its first German painting, the 15th-century ‘Crucifixion’ by the Master of the Aachen Altarpiece. And even after this, the painting wasn’t displayed until the 1880s. This aversion to German paintings extends into the early 20th century, and it wasn’t until the rise of Modernism that the institution and audiences of the time began garnering a larger appreciation of these works. For example, the gallery was offered ‘Virgin and Child’ by Dürer’s workshop in 1872, which was not accepted until 1945! 'Virgin and Child (Madonna with the Iris)' by Dürer's Workshop, photo courtesy of the National Gallery

As interesting as finding out the provenance of the gallery’s acquisition of these works was, I was surprised, however, to find that this theme was a the only prominent driving force of this exhibition. I did not expect half of all the caption details for each painting to be so descriptive of which bequest resulted in the appropriation of the work and must admit that I was a little disappointed as a result. In all honesty, I’m afraid that my aesthetic appreciation of the works was a little diminished by my disappointment, particularly as the exhibition itself had “beauty” in its title. Nevertheless, some interesting comparisons were drawn and I was especially struck by Raphael’s ‘St Catherine of Alexandria’ which was juxtaposed with Grien’s ‘Trinity and Mystic Pieta‘,  to enhance the contrast in styles and heighten the disparate notions of beauty between the Italian and Northern Renaissance. The Raphael did look very out of place among all the Northern works but, I suppose, that was the point the curator was trying to make. For me, the most intriguing objects were sourced, ironically, from outside the collection of the National Gallery. The miniature sculptural portraits loaned by the V&A were intricate and beautiful, and the inclusion of woodblock prints and engravings of Dürer and Cranach the Elder,  originally from the collection at the British Museum, were a refreshing change for the eye, and for me really captured the essence of what was meant by a “strange beauty”, displaying raw emotional power and visceral detail. In my opinion, it was the greater focus on the visual nuances of the prints and paintings in the fourth and fifth room that picked up the pace of the exhibition. For me, the most interesting parts of the exhibition were those which focused on the innovations of German workshops rather than the acquisitions of the National Gallery itself and I would have liked to see more rooms dedicated to this.

'Man Holding a Glove' by Jan Gossaert, photo courtesy of the National Gallery

Strange Beauty exhibits some gems of the German Renaissance from the National Gallery’s  permanent collection and visiting the gallery brought them to my attention. For example,  Gossaert’s ‘Man Holding a Glove’, which I felt somewhat guilty and ashamed that I had never spotted from previous visits, captured my attention for the first time and I’m glad that I will now be able to go back and re-visit it in the future.

The last room of the exhibition poses the questions in large font on the walls: “Is ugliness more authentic than beauty?” or, “Can art be both inventive and true to nature?” and paper and pencils where visitors could display their responses. It was amusing to read some of the scribblings of visitors, though one particularly scathing remark commenting, “what a waste of a room”, stood out. This posed an interesting point about curating and balancing the expectations of visitors whilst encouraging them to engage directly with exhibition content. Though I found myself edging towards agreeing that more could have been done with this last room, still, it was an interesting show and one which allowed me to discover some new art and ideas.