HomeBlogA Day in the Life of an AHA course 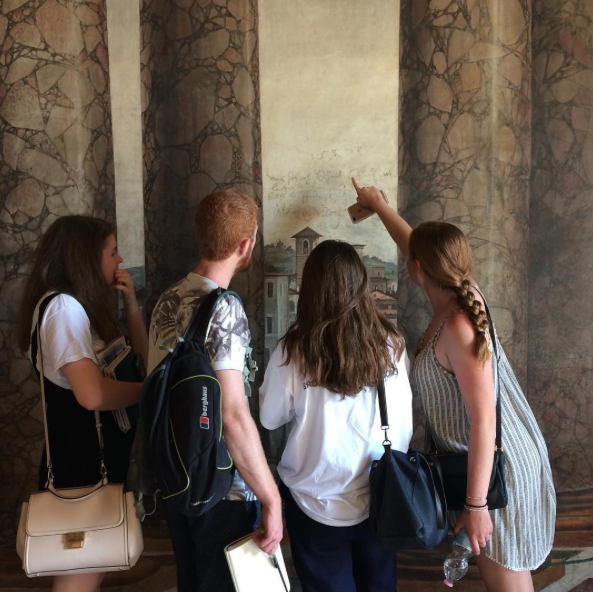 The timetable said we would “begin our exploration of Rome with an introductory walk and a Church crawl via the Pantheon and Piazza Navona.”

That doesn’t begin to describe our delight as we ventured out amongst the ochre-coloured buildings of various ages, over the Roman cobbles. And already the learning begins …

The cobbles are called “Sampietrini” which translates as “little St Peters”: they were mined from the surrounding volcanic hills by the ancient Romans, so some are 2,000 years old.  I’m amazed when I see from some repair work that they are shaped like little teeth, the root going down into the earth.

Our hotel is in the charming and lively Campo Dei Fiori, the old flower market. It now holds the most tempting selection of food you can imagine from stripy aubergines to freshly chopped salads and huge, whole Parmigiano Reggianos. I can’t wait to buy our picnic lunch … 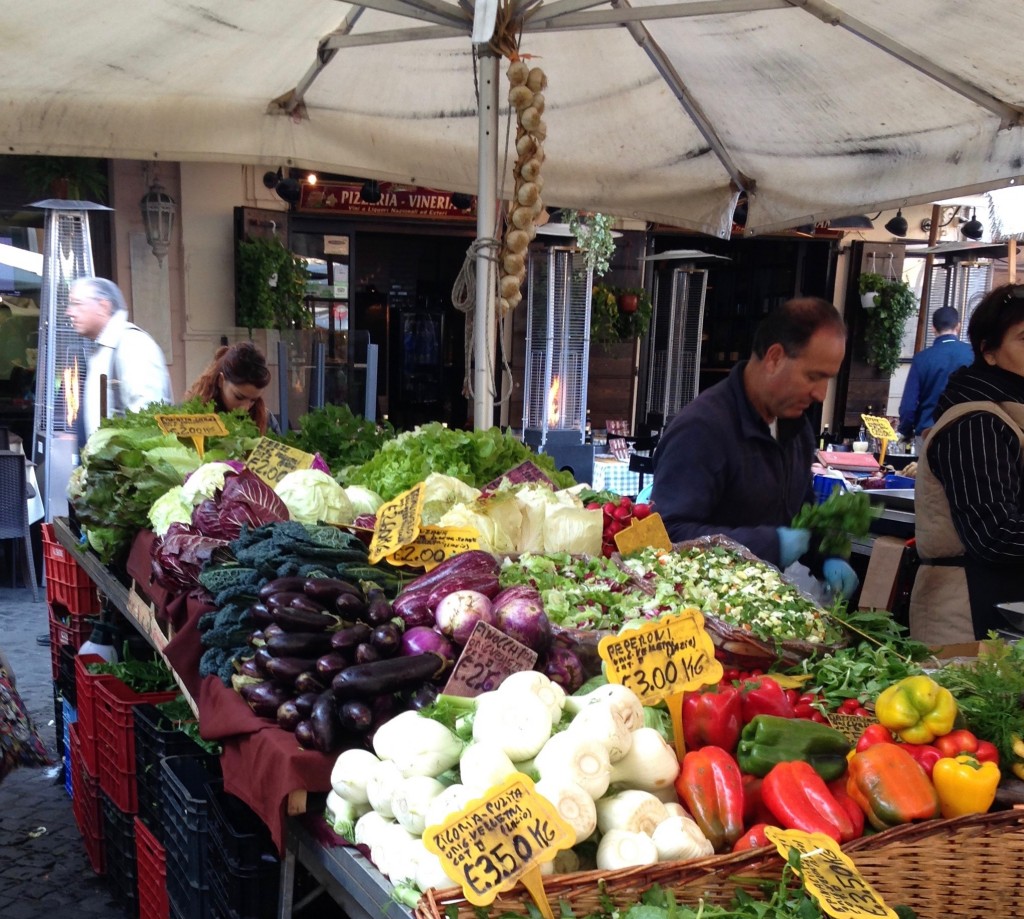 We are heading towards the Piazza Navona, when the tutor diverts us into an imposing courtyard and asks us to look up (a phrase we’ll hear a lot).  Around the upper levels are niches filled with extraordinary statues which we are encouraged to explore with our eyes … is that a pair of dolphins at the feet of one figure … what does it all mean? 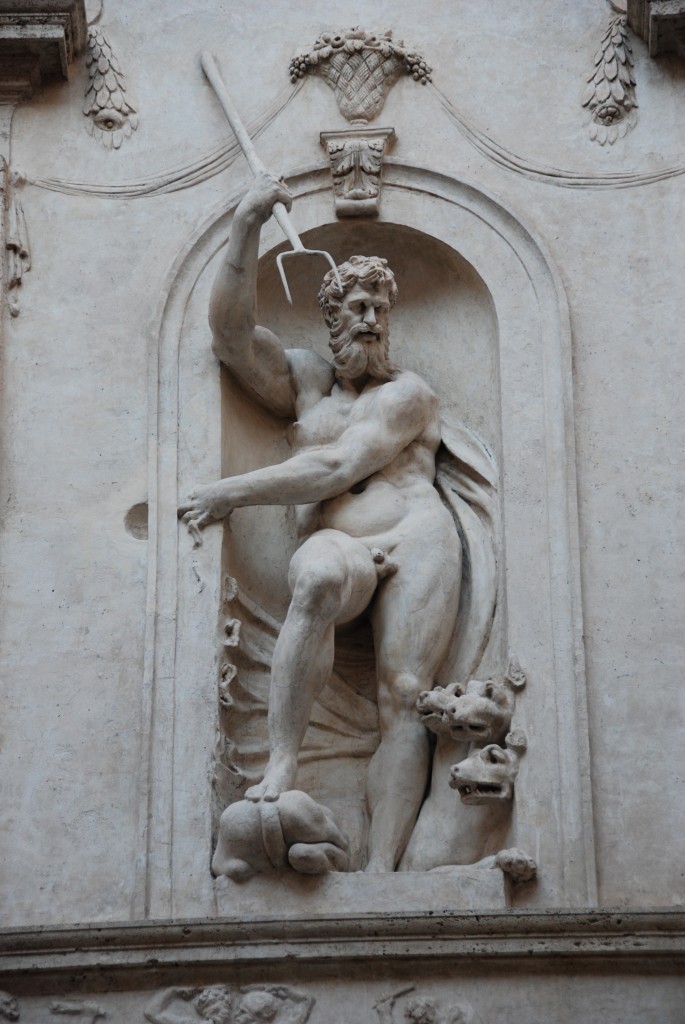 We learn that this is the Palazzo Spada bought by the Cardinal Spada in 1632.  The stucco work in the inner courtyard is full of symbolic devices: dolphins at the feet of a female figure signify Venus, who was carried ashore by them.  Our tutor then points out an arch in the courtyard which goes through to another courtyard.  We are all enjoying the lovely long vista to a distant statue, when someone in the other courtyard steps into the vista.  Suddenly it feels all “Alice in Wonderland” – what’s going on?

It turns out that what we thought was a life size sculpture at the end of the vista is only 60 cm tall! Cardinal Spada commissioned Borromini to work on his palazzo and it was he who, with the help of a mathematician, created the forced perspective optical illusion in the arcaded courtyard (see title photograph).

In it, diminishing rows of columns and a rising floor create the visual illusion of a gallery 37 metres long (it is 8 metres) with a lifesize sculpture at the end.  We are amazed: to think that Borromini was working in the 1600’s, over 400 years ago with no engines and no electricity.

The “pièce de résistance” of the Piazza Navona

But the Palazzo Spada’s clever tricks are just an aside on our orientation: we push on to Piazza Navona.

Moving from the tight-knit street to the glorious Piazza gives a sense of space and freedom that delights. The sun gleams on the dome of Sant’Agnese in Agone, which we learn is the titular church of the Pamphilj (Pope Innocent X’s family).

Everyone is drawn to the central fountain, the Fontana dei Quattro Fiumi (Fountain of the Four Rivers), built in 1651 by Bernini and topped by the Obelisk of Domitian. It is stunning. The water looks so clean and we’re told you can drink the water from all of Rome’s fountains … it’s delicious. 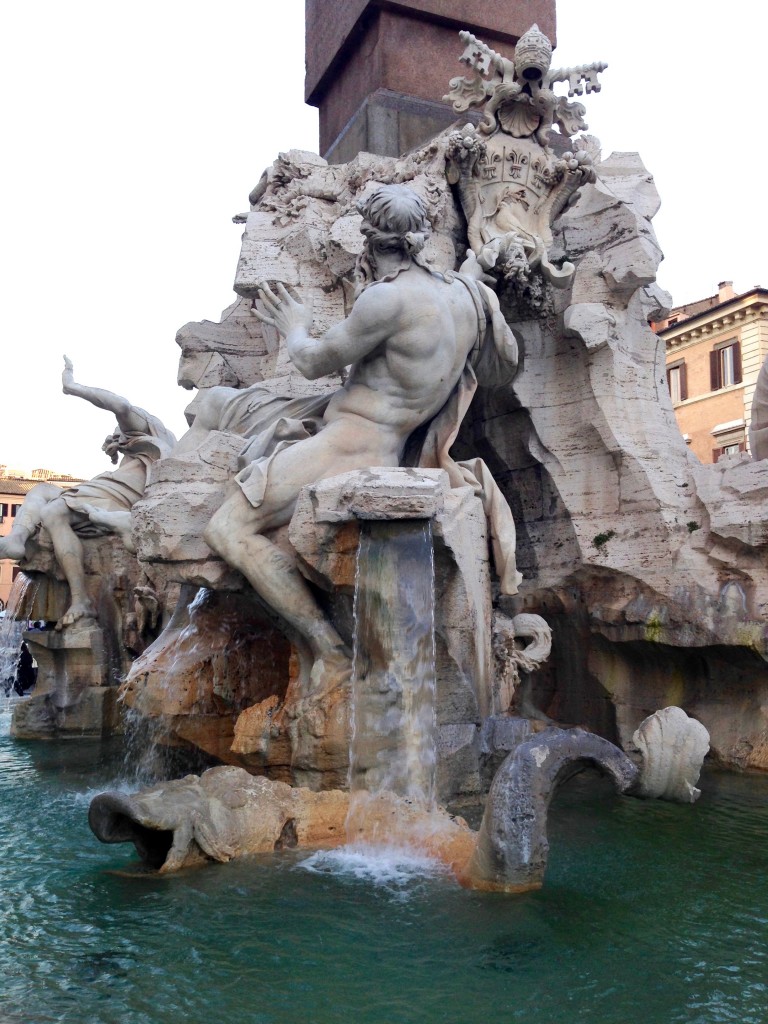 The sculpture on the huge fountain is impressive and amusing when you see that it drains through a fish’s mouth.   Examining it in detail, it seems extraordinary that anyone could create it out of marble: it is truly monumental.

The square itself is humming with people, busy restaurants and the man selling helium balloons who has them on his fishing rod so they float high in the blue sky, advertising his wares.  As we absorb the Italian background hum, we notice the different shades of ochre and pink that the surrounding buildings are painted, the false windows on the house opposite the Quattro Fiumi, and the evidence of past wealth, politics and a fascinating history over many centuries. 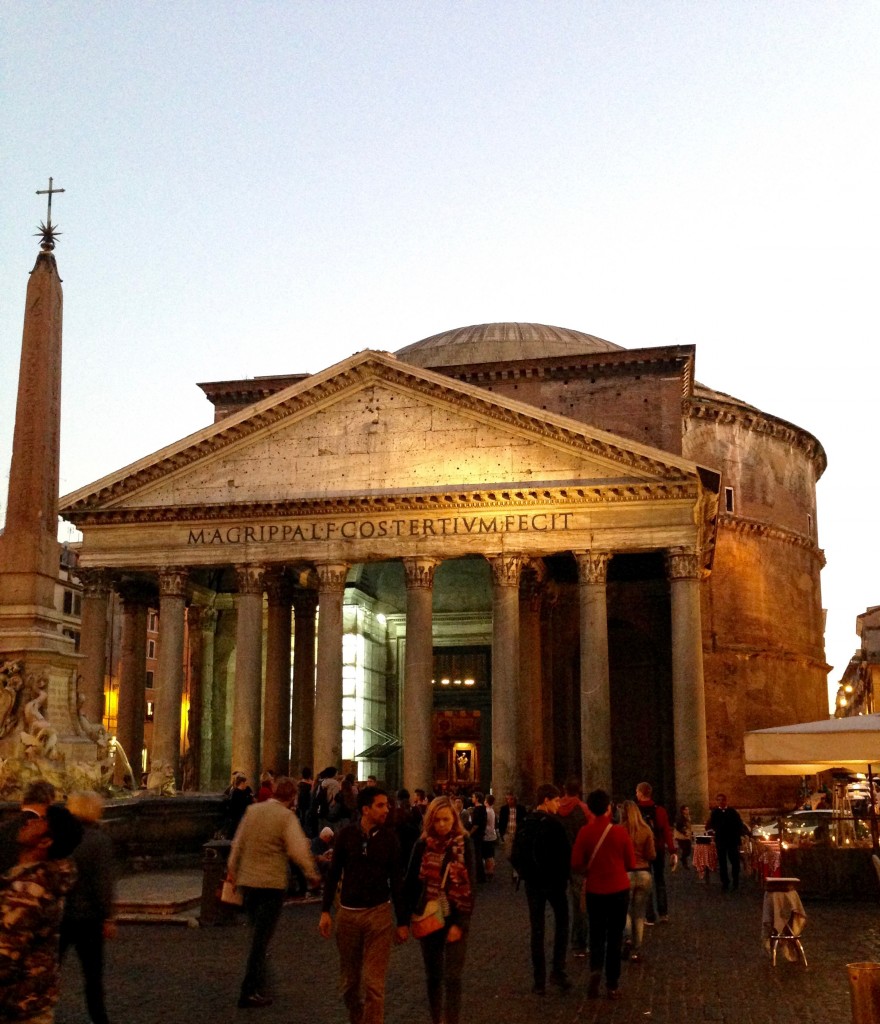 Covering a few more “sampietrini” we come out into a square, Piazza della Rotonda, with an incredible building to one side. Another obelisk to mark the spot and what looks like a triple row of huge columns* announces the grandeur of the Pantheon.

Our tutor explains a little of its history but nothing prepares you for the immense, circular space behind the columns, the open hole at the top, the “oculus”, allowing light and weather into this ancient place. And then we’re told the roof was made of concrete … in 200 AD! The Romans invented it but the art of making it was lost when the Empire fell and not “re-discovered” until the 1800s. To hold the weight the wall is over 6m thick and it is still the world’s largest unreinforced concrete dome. 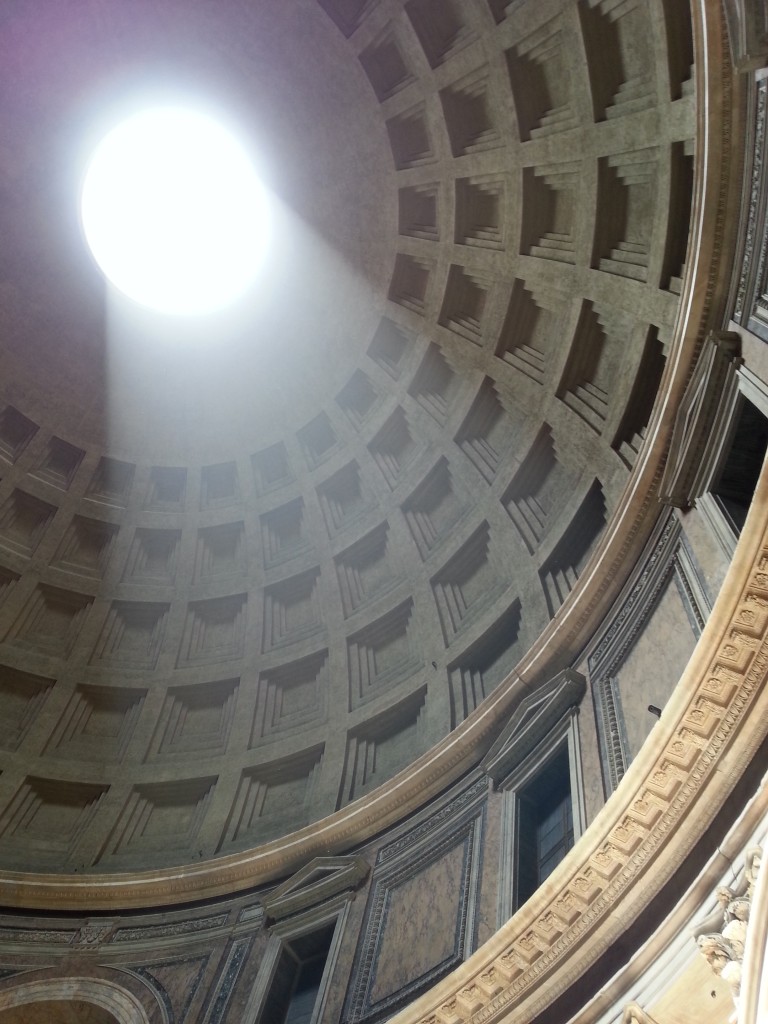 Built on the site of an earlier building (like everything in Rome, it would seem) it was completed by the Emperor Hadrian in about 126 AD. He kept the inscription from the earlier building which reads “M[arcus] Agrippa L[ucii] f[ilius] co[n]s[ul] tertium fecit” or “Marcus, Agrippa, son of Lucius, made [this building] when consul for the third time”.

We have learned so much in such a short time and already it is lunchtime. It’s not far to a restaurant where the owner greets our tutor by name and we know that we’ll be eating like the Romans do … with such a lot to discuss.

*It is actually 8 in the first row and two groups of 4 behind.