from the Blog Why the Elephant…? 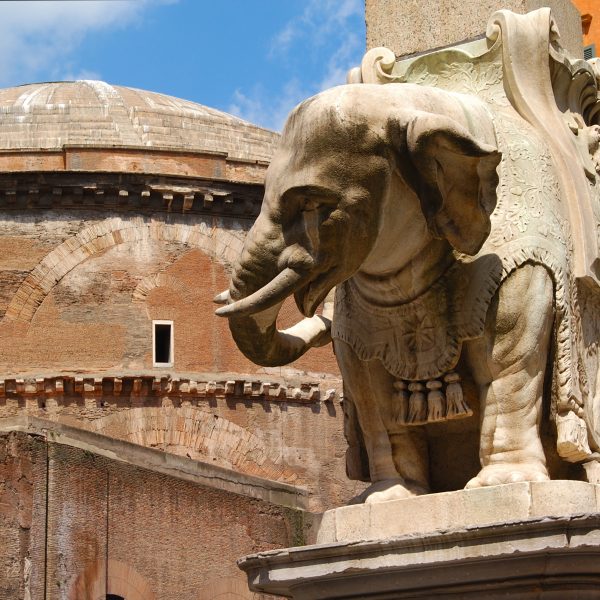 A number of students have asked us why we have a sculpture of an elephant as our featured image. You’ll probably have seen him cropping up on our website, prospectus and perhaps even at your school’s gap year fair.

Well this isn’t just any elephant. It was designed by none other than Lorenzo Bernini in 1667 and most likely sculpted by his assistant Ercole Ferrata. Upon his back sits a tall Egyptian obelisk which was unearthed nearby, left over from an old Egyptian temple to the goddess Isis. It is located opposite the church of Santa Maria Sopra Minerva in Rome and was commissioned by the then Pope Alexander VII.

OK, so it’s a sculpture by one of Italy’s most prominent 17th century artists but:

Elephants in the 17th century were seen as fascinating and curious creatures, even exotic. The fact that he balances an ‘exotic’ foreign monument on his back might then seem quite fitting. An elephant, being rather large and strong, also provides an innovative support for the obelisk. Again we are witness to the ingenuity and playfulness of Bernini.

There is a legend that Bernini was playing a little joke by positioning the elephant the way it is today. The elephant’s behind is directed at a whole monastery of Dominican monks housed next to the church. It even looks like he is waving his long trunk in their direction! Who knows if this was really Bernini’s intention, but we like the idea that he was trying to make us chuckle at this charming and intriguing creature.

So all in all, Bernini’s elephant probably best embodies all we stand for. Something deeply steeped in Art History whilst at the same time is fun and engaging!